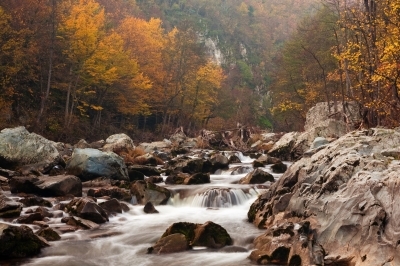 When it rains, some water soaks into the ground and some of it collects, forming streams and rivers that eventually flow into the sea. The water that falls as rain is constantly recycled because water can change from a liquid to a gas (a process known as evaporation) and back to a liquid again (condensation). The water from rivers, seas and oceans is turned into water vapour by the sun’s heat and by the wind. This vapour rises up into the sky and the cold air there makes the vapour condense into droplets and form clouds. These droplets grow bigger and heavier until they eventually fall as rain. This continuous movement of water is called the water cycle.

Three quarters of planet earth’s surface is covered by salt water – the seas and oceans. The quarter of the surface which is land holds more water – this is fresh and will be found in rivers, lakes or underground.

A river is therefore a very important part of the water cycle, carrying rain water back to the sea. It can be a long journey for a raindrop. Rivers can run for many hundreds of miles. The longest river in the world is the Nile in Africa. It is 6,700km long. The longest river in Britain is the River Severn, which is 354km long.

Of course, not all the water flowing down the rivers is returned to the sea straight away. Some of the water that we use in our homes, schools, shops, offices, factories etc. comes from rivers. When we use water we remove it from the natural water cycle and return it to rivers via sewage treatment systems. This is a manmade cycle.

Read More: How does a river start?