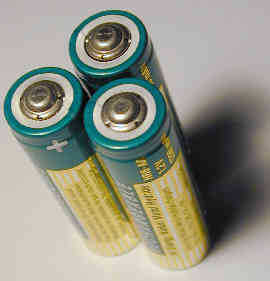 Contrary to popular belief, a battery does not store energy but it is used to make electrical energy when needed.

Activity:  A simple battery can be made by using a pile of ten 2p coins interspaced with blotting paper and foil. Cut our some round shapes of blotting paper and aluminium foil (a little larger than a 2p coin). Soak the blotting paper in salty water. Place a piece of foil over a 2p coin and a piece of salty blotting paper on top. Repeat these layers to make a small pile. Fix the end of a piece of wire underneath the pile and another on top. If the free ends of the wire are connected in a circuit with a light bulb, chemical reactions in the pile make electrical energy flow and the bulb lights up.