Warmer UK seas are attracting stingrays and other foreign species.  Fishermen off the south and south-west coasts of the UK are finding species that you would normally find in the Mediterranean!  Bluefin tuna, stingrays, thresher sharks and ocean sunfish are being spotted as sea temperatures rise. 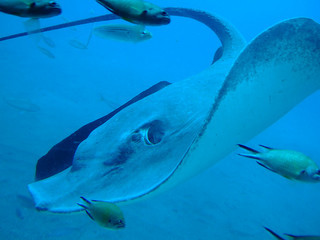 These new species are usually found in waters off  Spain, France, Lanzarote and Tenerife.  So why are they here?  Climate change is being blamed for the rise of invasive species in UK waters as sea temperatures rise.  Marine scientists are worried about the effects these new visitors will have on our marine environments.  They may pose a serious threat to our native fish by increasing competition for food, and bringing with them new diseases.

But it's not just a challenge for the fish.  As we know, fishermen are already struggling under strict fish quotas limiting the amount of fish they can catch, and competition from other countries whose fish are on the move may cause fresh clashes and problems.  Bluefin tuna in particular are extremely valuable in the seafood market, and they are now classed as a critically endangered species due to over fishing.  In fact, many say that we should stop all catching of them completely until they've had time to recover.

World fish stocks are dwindling and there are very serious concerns that many fish species, which are vital food sources for millions of people may soon disappear forever.  As climate change brings these new challenges there are even more reasons to be very careful with what we eat and what we catch to protect the oceans and their future.

Read More: What Can Be Done?