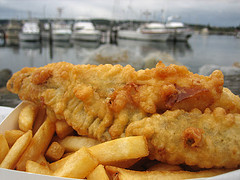 Did you know that people eat sharks in the UK?  Probably not because they're not called sharks on the menu at the fish and chip shop.  Every year tens of millions of sharks around the world are caught for our dinner plates in the United Kingdom, Europe, United States and beyond.  But what are these mysterious creatures?

The sharks we refer to are known as spiny or piked dogfish, but menus call them 'rock salmon' 'rock' 'spurdog' or 'huss' because it sounds tastier!  Millions of them are caught every year and this has given them a place on the IUCN's Red List of Engandered Species as Vulnerable - and no animal wants to be on that!  Spiny dogfish can grow up to 1.3 metres long and live in shallow waters across the world.  They are slow growers and take about 10 years to mature into adults and live for 40, sometimes 70 years!  Because they grow slowly and babies remain in the womb for 2 years it takes a long time for them to re-populate and their numbers are falling drastically.

Another concern for sharks worldwide is the demand for shark fin soup, which is a delicacy brought to many countries, including the UK, from China where it is a soup for special occasions.  To make this special soup in many cases, sharks are caught, their fins are cut off and then they are thrown back into the sea to drown and suffocate.  This cruel practice has been going on for years.  Altogether it is estimated that between 26 million and 73 million sharks are caught every year and that a quarter of shark and ray species, for which we have adequate data, are regarded as threatened with extinction.

What can you do to help?  You can avoid eating rock salmon or shark fin soup in restaurants, cafes and fish and chip shops.  As a class at school you could write to your local Chinese restaurant and, if they sell shark fin soup, ask them to take it off the menu.