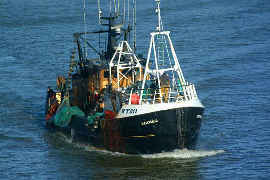 It has been estimated by the United Nations Food and Agriculture Organisation that over 70% of the world’s fish populations are either fully exploited or depleted.

When talking about overfishing we usually use the term fish 'stocks' - as if fish were a product on the supermarket shelves.  It is this idea that has led us to many of our world's problems today; that of seeing the natural world as a commodity - as a resource from which humans can take forever.  Overfishing is one of the most dramatic examples of the devastating effects of our modern society's outlook on nature, and proof that our world's resources are not limitless.

Most of the problems associated with overfishing have been caused in the last 50 years by the growing human population demanding food and rapid advances in fishing technology.  There used to be hundreds of trawlers and fishing boats based at ports like Peterhead, Grimsby and Great Yarmouth, but many of these have now been replaced by huge factory ships which are able to stay out at sea for weeks at a time. These factory boats have all the equipment necessary either to freeze or tin fish caught by their hunting ships, so that they need to return to base only when their holds are full.

With the introduction of the new factory boats, there was a 7% growth in catches every year during the 1950’s and 60’s, but since then there has been little increase in catch size and many of the world’s most important fisheries have closed down, with many more suffering so badly from overfishing that they are unlikely to recover.

As catches have gradually become smaller, so the mesh sizes used in fishing nets have decreased, allowing smaller and smaller fish to be caught. Many of these are too small to be used as food, so they are crushed to be made into either animal food or fertiliser.

Fishing using nets is indiscriminate. Any fish which get in the way of the net will be caught in it if they are too big to get through the mesh. For every tonne of prawns caught, three tonnes of other fish are killed and thrown away. 20,000 porpoises die each year in the nets of salmon fishermen in the Atlantic and Pacific Oceans and hundreds of thousands of marine creatures are killed each year by tuna fishermen.