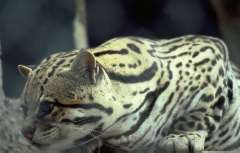 The ocelot, known in Mexico as the 'tigrillo' or 'little tiger', ranges through the forest regions of Central and South America from Texas in the north to Brazil and Paraguay in the south. It is the third largest of the South American cats after the jaguar and puma.

A fully grown male measures about four and a half feet from nose to tip of tail. Its beautiful spotted coat provides excellent camouflage in its forest home where it preys on a wide variety of animals, including small deer, agoutis, rats, peccaries, pacas, birds and some reptiles.

Sadly, it is much hunted by humans for its fur, and it is now seriously threatened. In areas where it is heavily hunted it has become a nocturnal animal, but elsewhere it can be seen in daylight. Although it can climb, the ocelot seems to hunt mainly on the forest floor.