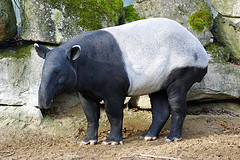 Tapir is the name given to the four surviving species of this large woodland mammal which form the family Tapiridae of the order Perissodactyla (odd-toed hooved animals). They are heavily built creatures with four front and three hind toes, a practically non-existent tail and with the nose and upper-lip forming a short flexible trunk.

Three of the four species live in Central and South America, but the fourth is to be found in the rainforests of Malaysia. The Malayan Tapir is easily recognised by his black and white colouring. This animal may stand 3and a half feet (approximately 1 metre) at the shoulder. It is shy, nocturnal and quite inoffensive, frequenting deep forests and keeping close to water and mud. Its diet is exclusively vegetarian. The young are spotted and striped with white.

To find out more about Tapir visit our Tapir Factsheet below.