Petrol and diesel come from crude oil, which comes from deep underground.  Crude oil is refined to make petrol (in America this is known as gasoline) or diesel.

Most forms of transport use either petrol or diesel to power their engines - from lawnmowers, cars, buses and motorbikes to large ships and aeroplanes.  Petrol and diesel power the lorries and ships that get food to the supermarket, cars and buses might help you get to school, in fact, petrol and diesel make so many things possible that, like electricity, they’re now vital to our way of life!

History
The history of crude oil starts between 150 and 200 million years ago when animals living in the sea - plankton and other organisms - died and sank to the sea bed.  Over time, more and more bodies of sea creature built up on the sea bed and were covered over with silt.  The silt built up more and more and started to turn into rock.  Meanwhile, the bodies of the plankton and other animals, trapped under the silt, were changed by pressure and heat of between 60 and 120 degrees C into the black, goopy liquid we call crude oil.  Large deposits of oil can be found deep underground and under the sea bed in different parts of the world. 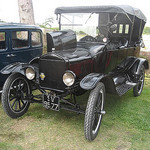 The history of petrol and diesel as a transportation fuel for humans began in 1858.  The first combustion engine was invented by an engineer from Belgium but it took another 40 years before petrol-powered cars were sold commercially.  American industrialist Henry Ford is famous for inventing the assembly line technique of mass production that paved the way for millions of factories and products.  Henry Ford of the Ford Motoring Company began to sell the Model T ford in 1908 and went on to sell 15 million in the next twenty years.  This also led to the creation of miles and miles of roads and streets across the USA.  Ford are still operating today, although the cars look a little different.

An engine’s purpose is to convert the chemical energy of the fuel into kinetic energy, movement!  Petrol or diesel is burnt in the internal combustion engines of vehicles.  Like power stations, engines use heat and pressure to move moving parts that drive the car forwards.

Unfortunately, as well as kinetic, sound and thermal energy this combustion technique also produces chemical energy as a byproduct.  This chemical energy leaves the engine via the exhaust pipe as exhaust fumes.  Sadly, many of these fumes are harmful for us, animals and the environment.  Let’s take a look at the different chemicals you might find in the fumes -

Alternatives to petrol and diesel are well underway and include electric cars and biodiesel.  Some cars can be converted to run on the oil used to cook chips!  Others can be powered by plants that are refined in factories into liquids a little bit like petrol.  But these solutions also create problems of their own.  Electric cars obviously need electricity and how ‘clean’ or green the cars are also depends on how that electricity is produced.

Biodiesels on the other hand require acres and acres of crops which are often grown where lush primary rainforests once stood.  The amount of land needed to grow crops for the fuel could be left as rainforest or, if it was already clear, could be helpful for growing food for our ever-growing population, or the world’s livestock.