Trees and shrubs from outside this country (invasive species or 'aliens') do not have the variety of insects, fungi and other wildlife associated with them that natives have. If the aim of planting is both to educate children and to enhance wildlife in the area, native plants are to be preferred. Aliens, however, sometimes have a role in special sites. The table below, showing the numbers of insect species associated with various deciduous and coniferous trees in Britain, indicates the importance of choosing native tree species:- 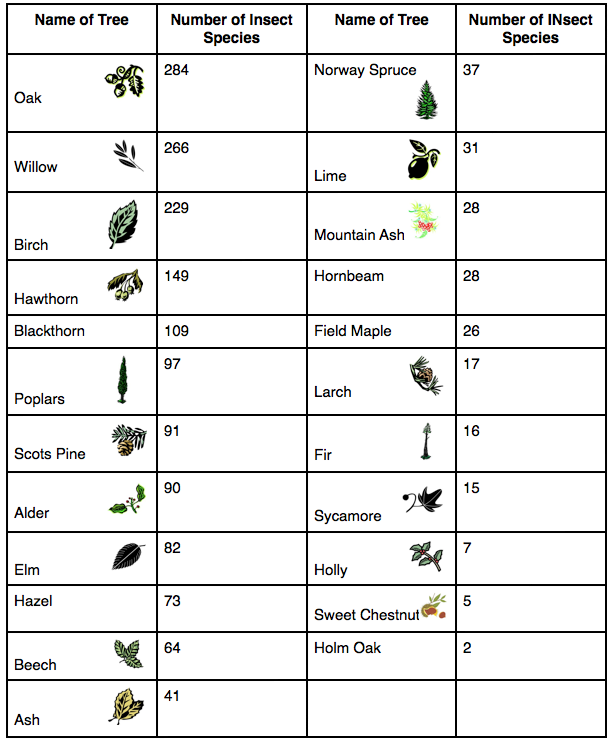 Grey alder and false acacia are nitrogen fixers, suitable for dry impoverished soils. Swedish whitebeam and common whitebeam are hard, wind-resistant trees with bright red berries that provide food for birds. Sycamore is very common in many areas due to its tolerance of exposure and poor soils, but it is a very invasive tree, poor in wildlife, and should not be planted. Oak, ash, beech and lime are very big trees at maturity, and as such cause a lot of problems if too near buildings. However, there are small-growing varieties which can be obtained. Poplars and willows have very high wildlife value and grow rapidly, but have a very high moisture demand and on a clay soil give rise to shrinkage which can cause the collapse of walls. They should not be planted within 60m of any structure on clay.

Where there is room for a block of tree planting (100m square or more), it is best done on a forestry pattern. The principle of this method is that conifers such as Japanese larch, Scots pine and Sitka spruce are planted in a mixture with hardwoods, for which they act as protective nurses, and are thinned out as the plantation matures. Presented with a site, the Forestry Commission can advise on a suitable mixture. 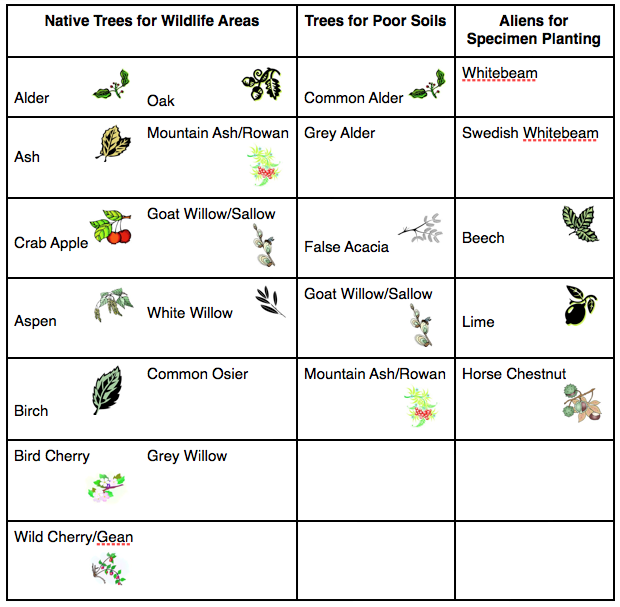 Many alien shrubs are good for wildlife. Pyracantha and Cotoneaster berries attract birds: Buddleia, Berberis, Mahonia, Escallonia and others attract insects. While in large scale planting it is obviously better for education and wildlife to use native species, in formal areas it is possible to choose attractive garden plants which have a wildlife value. 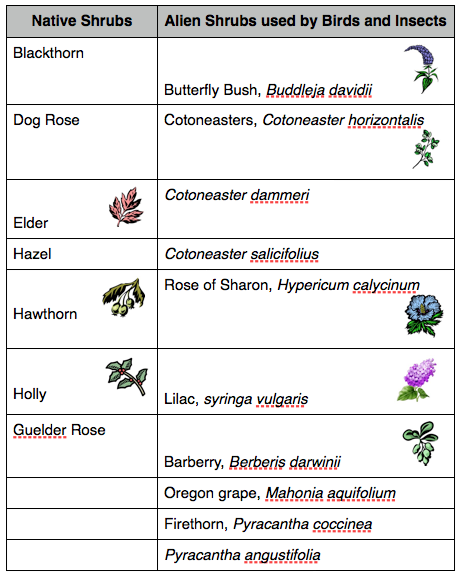 Native wild flowers can be cultivated by allowing them to invade after suitable treatment; e.g. rotivating an area and allowing it to run wild, or leaving strips of land next to walls and fences to become covered with bramble (an excellent wildlife plant). More challenging but more rewarding is to collect seed and establish wild flower gardens. Plants like toadflax and knapweed produce colourful flowers and large quantities of seed. It is best to find a plentiful local patch and keep an eye on it until the seed is definitely ripe. It should be collected on a dry summer’s day in paper bags so the seed is not damp. Some seed will need stratifying (storing in a sand pit during the winter) before it will germinate, some can be sown immediately. Unlike growing traditional cultivated plants there may be a lot of trial and error, but this can be turned into a series of class exercises in finding out the effect of different treatments. Alternatively, wild flower seeds and plants can be bought from a number of companies, but make sure you are buying native stock and not continental cultivated strains.

A few alien garden plants have wildlife value e.g. Michaelmas daisy and pink valerian attract insects, but others are more or less barren. 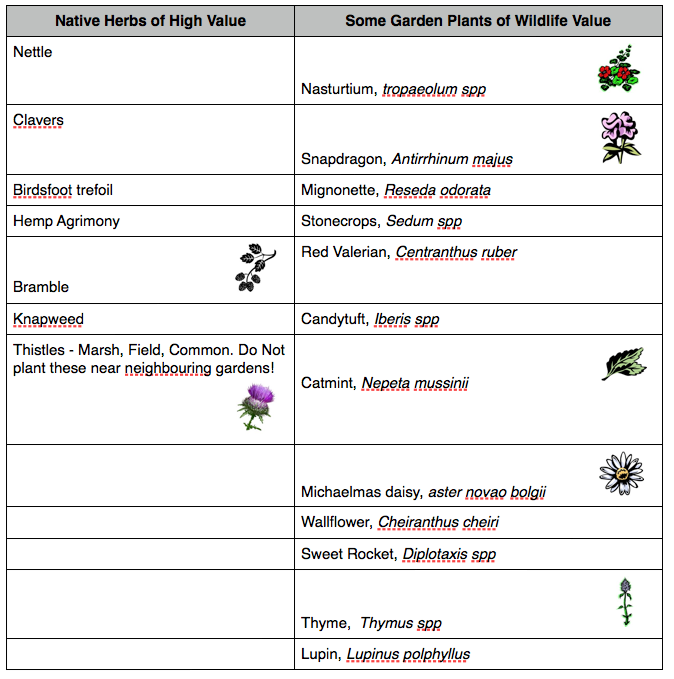 Read More: When to Plant