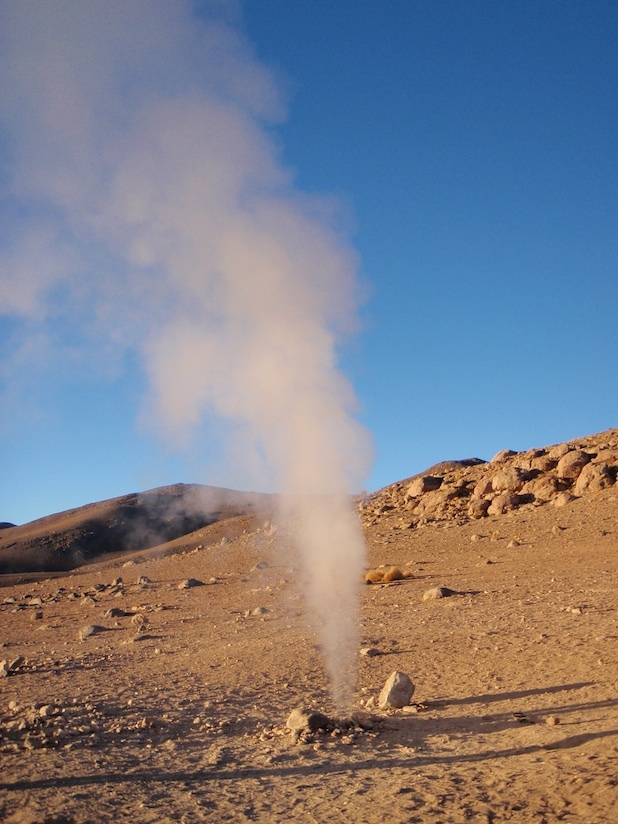 Geo-thermal means “the earth’s heat”.  Underneath the crust of the earth’s surface is a bubbling, hot thick layer of molten lava.  It's the same stuff that comes out of volcanoes!  If you go right to the core, the temperature is as hot as the surface of the sun!  Sometimes this heat escapes and heats water which is nearer to the surface of the earth.  There are hot pools in Bolivia like the one pictured here, Chile in South America, Iceland and Yellowstone park in the USA.  Many of the pools are boiling but some of the cooler ones are safe to swim in.

If you were to go as little as 3m down you’d find the temperature of the ground stays a constant 10 - 16 degrees centigrade all year round.  Geo-thermal heat pumps can be used underneath buildings to transfer the heat from the ground or water into a building during the winter.  In the summer they can do the opposite and put the heat from the building back into the ground!  Cold water can be sent down in pipes to 2000 metres deep where it can be heated to about 66 degrees centigrade.

In places where it is known that there is a lot of lava heat near the planet’s surface we can drill down and pipe the steam or hot water up.  This is used to drive turbines which generate electricity.  This is what they do on the Portuguese Azores Islands - islands which were formed by volcanoes.  These power stations use up much less land than a coal powered station and emit 97% less sulphur compounds which are what cause acid rain.  They are better at producing electricity for a longer time too.