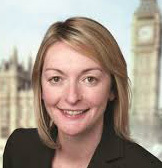 She was elected as the first female MP in South East Wales.

Brought up in nearby Cwmbran she was educated at Croesyceilliog School before reading History at Birmingham University. Following University she was also a student at Coleg Gwent Nash Campus. Before becoming a Member of Parliament Jessica worked for two local MP's (Llew Smith in Blaenau Gwent and Huw Edwards in Monmouth) and following that for the Wales Labour Party where she was General Secretary.

Jessica and her partner Sion had their first child, a baby girl called Mali, in December 2006 and their second child, a boy named Ifan, in October 2008.