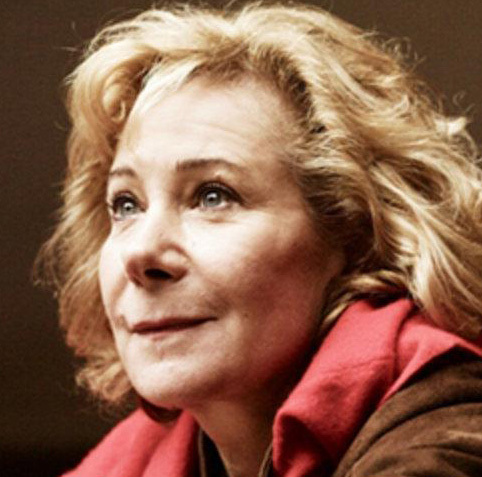 Zoë Wanamaker was born on May 13th 1949 in New York, USA.  At the age of three, Zoë had to move to London with her family, because her father, the actor/director Sam Wanamaker, was blacklisted during the McCarthy witch-hunts.  Her mother, Charlotte Holland, was an actress and radio star; when they came to London she left work so she could take care of her family.  Zoe also has two sisters - Abby, the eldest, and Jessica, who is the youngest.  Zoë comes from a Russian-Jewish background.

Sam Wanamaker is most well known for the reconstruction of Shakespeare's Globe Theatre on the South Bank in London.  He was passionate about building a faithful replica of The Globe, and spent nearly thirty years trying to get his project finished.  Sam was awarded a CBE in early 1993, and sadly died later that year of cancer.  Queen Elizabeth II opened the Globe in June 1997, and Zoë was the first person to speak on stage when she read a passage from Henry V.

Zoë decided she wanted to act at the age of ten, after spending a summer in Stratford with her parents.  They tried to stop her going into the acting industry, as they didn't want her to have to go through its rejection and fierce competition.  She trained as a dancer and went to art school.  She also had a very short career as a secretary, and even toyed with the idea of becoming a nun!  She finally knew she definitely wanted to act.

Zoë joined the Central School of Speech and Drama, and after spending three years there, she left in 1970 and went straight on to stage work.  She went from strength to strength and recently became an Associate to The National Theatre, on the South Bank in London.  She also remains a trustee of Shakespeare's Globe, at which she has recently unveiled a Blue Plaque that was awarded to her father for his efforts, and in recognition of the Globe.  The award was a People's Choice award voted for by the public, and Zoë accepted this on his behalf.  The Blue Plaque can be found on the site of the Globe.

She went from stage to our TV screens in many different roles, and slipped from one role to the next with no problem and so much talent.  She is now a well-known face on TV, mostly recognised for her recent role as Susan Harper in the BBC sitcom My Family, in which she plays alongside Robert Lindsay; and also for her role as Tessa Piggott in Love Hurts, in which she worked with Adam Faith in the early 1990s.  Zoë has more recently starred in films such as Harry Potter and the Philosopher's Stone, in which she played the famous Madam Hooch.

Zoë is married to actor/writer Gawn Grainger, with whom she previously worked in Bob Hoskins' 1988 film The Raggedy Rawney.  They married in November 1994, and she has now taken on the role of the 'wicked stepmother' to his two children.

She has been nominated for many awards and won two Best Actress Olivier awards, among others.  In 2000 she was awarded a CBE by the Queen in the New Year Honours list.  Zoë has done extensive work for charity, which included reporting from South Africa on Ethiopia's economic crisis in 1993, for Comic Relief.  She has also been working as Honorary Vice-President of the Voluntary Euthanasia Society for some time.

Having done over a hundred roles and performances in a career spanning over 25 years, with her talent shining through in each one, she has gone from playing a mad aunt, a twin, a Leprechaun and even a dog, every time her performance better than before.  Zoë is one of the best actresses of her time and puts her 'all' into every show, series and film she does.